On my last cruise, I got to eat at the new (ish) restaurant of Rapunzel’s Royal Table, as you can guess from the name its based on the film Tangled.

I’ve already eaten at Tiana’s, so I had high expectations! I was on a 5 night cruise, so sadly on my itinerary only dined here once. 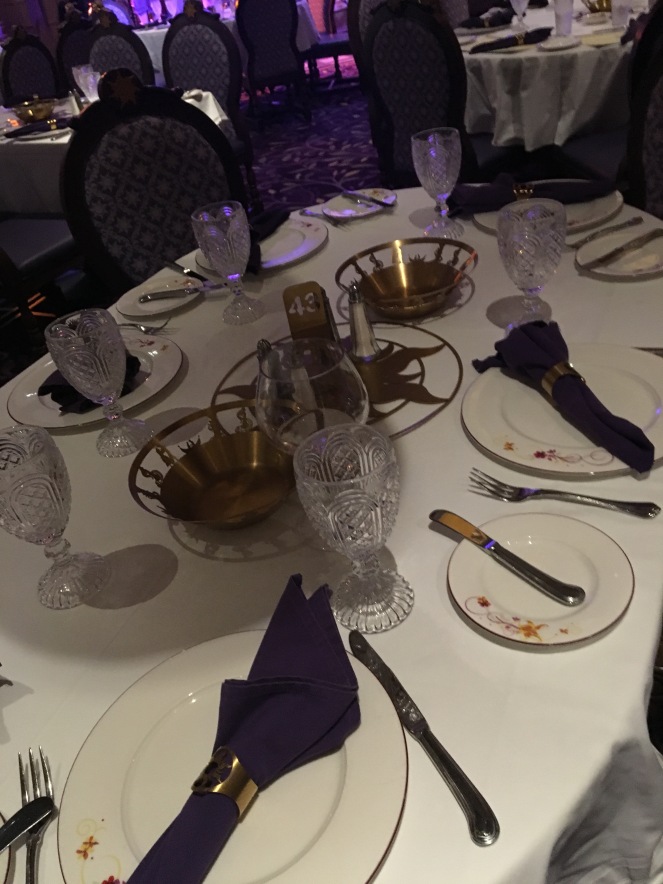 As you approach there are “thugs” welcoming you in, and making fun of people. We arrived early so we (well I) could see the restaurant without it being packed. Its very pretty, as the overhead lights are all the lanterns. The main colour is purple, with lots of gold.

I will say now, it was very dark so my photos are quite awful, but hopefully you can still enjoy them. Our table was quite near the front, and was same layout as Tiana’s. 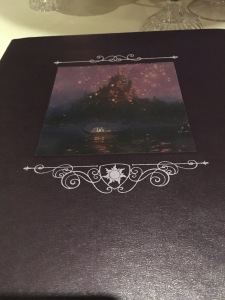 The theme of the evening was that its Rapunzel’s birthday and we are all there to celebrate with her. There was a live band with singers. The thugs wondered round the whole meal, sometimes stopping for photos, other times just annoying people – they was so funny to watch! Rapunzel and Flynn/Eugene also came round each table for a picture (if you wanted one). 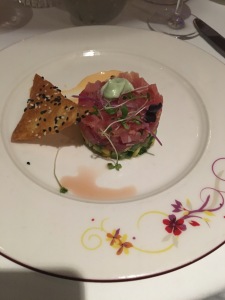 Ive also included photos of the menu and my food. My choices that evening were: Starter – the Ahi tuna tartar (I’ve had this on a previous cruise, and its so light and refreshing), my main course was the Tangled pasta and my dessert was of course – Rapunzels fry pan sweet bread, it was served in an actual pan! (it tasted like beignets).

I would have liked to eaten here twice, as its such a speicla restaurant, and it would have been amazing on the night the Tangled show was on!

Still, I got to try it and experience it 🙂 , So I’m very glad. One of our table mates was such a Tangled/Rapunzel fan she literally had booked the cruise JUST for the restaurant! 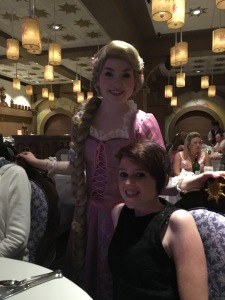 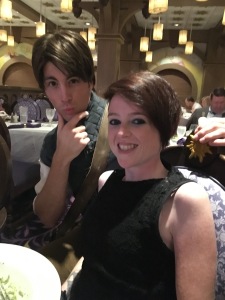 I’m sure every fan of Rapunzel (and I know a few) would absolutely love it. I think these themed restaurants are very popular and I believe they have been tests for the future ships. I think they will be on each new ship.

Which got me to wondering, if there was different themes/restaurants what would you like to see?? I’m thinking Moana – a bit of south pacific food with fish and exotic flavours, yellow carpet, blue walls, palm tress and a little show too. And being AT sea would feel perfect!